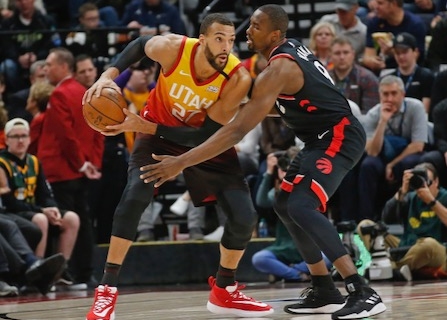 The NBA announced on Wednesday that it was suspending its season “until further notice” after Utah Jazz superstar Rudy Gobert, 27, tested positive for the coronavirus.

We previously reported…days prior to his diagnosis, Gobert thought it was funny to finish an interview about the coronavirus by touching all of the microphones, recorders and phones of reporters at a pre-game press conference on Monday.

Two days later, it was announced that he had tested positive for the COVID-19.

Now he says he’s “embarrassed” for his reckless attitude about coronavirus … and he’s apologizing “to the people that I may have endangered.”

NBA is suspending its season “until further notice” after Rudy Gobert of Jazz reportedly contracted the #coronavirus. What has make it worse is that he deliberately touched all the mics a few days ago during a press briefing to tell the public that the disease was not a big deal. pic.twitter.com/sSd97adIxr

“The first and most important thing is I would like to publicly apologize to the people that I may have endangered,” he wrote in an Instagram post. “At the time, I had no idea I was even infected. I was careless and make no excuse. I hope my story serves as a warning and causes everyone to take this seriously. I will do whatever I can to support using my experience as way to educate others and prevent the spread of this virus.”

After the NBA suspended its season indefinitely on Wednesday, the NHL, MLB and damn near every other major American sports league followed suit.

In his IG post, Gobert thanked everyone who has reached out to him since news broke about his diagnosis …  “I have gone through so many emotions since learning of my diagnosis…mostly fear, anxiety, and embarrassment,” he wrote.

“I am under great care and will fully recover. Thank you again for all your support. I encourage everyone to take all of the steps to stay safe and healthy. Love.”

“The NBA is suspending gameplay following the conclusion of tonight’s schedule of games until further notice,” the league said in a statement issued shortly after 9:30 p.m. ET on Wednesday. “The NBA will use this hiatus to determine next steps for moving forward in regard to the coronavirus pandemic.”